This video resonated with me in many respects: the mother who remains a victim of her own childhood, who emasculates her son’s father in front of him, who hates her son’s girlfriends, her son’s fear of abandonment fostering dependency, his confusion, anger, etc. and how to take responsibility and begin healing in a way the mother never did.

END_OF_DOCUMENT_TOKEN_TO_BE_REPLACED

I happened to tune about halfway through Hugo and Jake‘s live stream the other night, listening to them banter about in the background while I worked a project, when they begin to talk (1h 40m in) about being no contact with toxic family members and narcissism and I overhear Hugo say that, in one of his most productive therapy sessions ever, the therapist tells him that Hugo doesn’t have to entertain his messed up family’s demands of him. Instant validation!

In what myself and other survivors rediscover uncannily often, my own experience with this singular epiphany was nearly identical to Hugo’s. A counselor and psychologist who’s help I’d sought at a local community college told me the same thing that Hugo’s therapist told him and, like Hugo, I marveled that this idea had never occurred to me before. It was like a spell had been broken. A curse lifted. As though someone had to snap their fingers for me to wake up.

Over the years I’ve been gathering information on narcissism since first plugging my symptoms into a search engine and discovering it, I’ve read a lot of articles, watched more than a few videos and browsed numerous online support group forums but this is the first time I’d seen/heard someone else describe this fundamental moment of realization, a sudden paradigm shift in perspective, as I also experienced it. One moment I was on the inside looking out. The next, I was on the outside looking in and wondering how it was I could have ever been on the inside.

The rest of Hugo and Jake’s discussion is delightful, insightful and worth watching for anyone else – well, not Elon Musk fans probably – and especially for those who might be struggling with family estrangement over this family-centric holiday. Celebrate all the people you don’t have to deal with. Cut the toxic people out of your life. 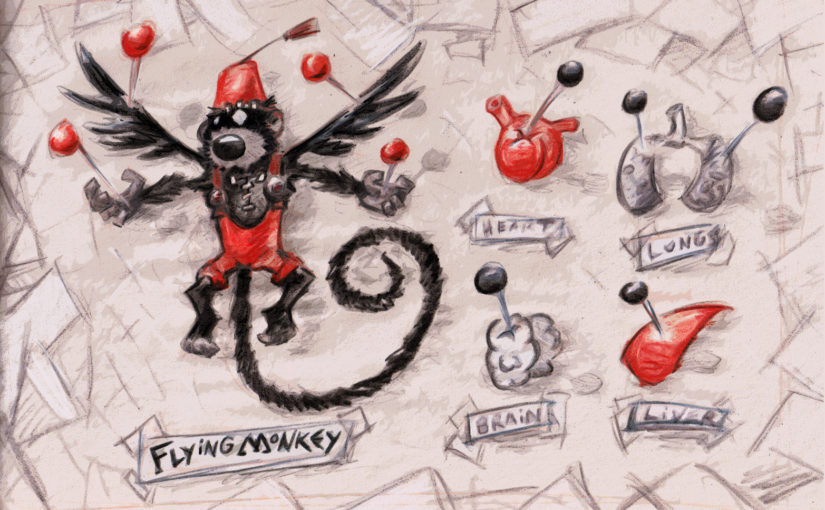 Like many (if not everyone) recovering from narcissistic abuse, I deal with my share of flying monkeys: enablers manipulated into serving the narcissist as their minions who seek to restore the status quo. And I find few things more validating than reading, hearing or seeing the recordings from other survivors of exchanges with the narcissistic abusers and flying monkeys that they’re dealing with. So this Flying Monkey Autopsy segment is for sharing and deconstructing my own contributions with a dash of reflective analysis for good measure.

The first flying monkey cooling on the slab is from my final email exchange with Sister.

Re: So Much For An Easy Morning

Sister
So Much For An Easy Morning

This is the email subject under which Sister begins her message to me.

Sister
Hey bro, So I was wondering why I hadn’t seen any of your posts lately; guess you decided to unfriend me. You’re such an idiot sometimes.

I had removed Sister and several dozen others from my list of so-called Facebook friends that I felt I didn’t have meaningful relationships with or were professional contacts that I felt didn’t belong connected to a personal account of mine.

Translation: I don’t give you permission to leave me.

Never mind what precipitated my decision to unfriend her. She’s telling me from the get go that my reasons aren’t important to her. Only the results.

END_OF_DOCUMENT_TOKEN_TO_BE_REPLACED

In Greek mythology, Pandora is the first woman created and given, among other gifts from the gods who created her, a jar containing all the evils of the world. Curious, she opens the jar and inadvertently lets the evils escape, leaving only hope remaining at the bottom of the jar before she manages to close it again.

Pandora is a scapegoat, set up to be blamed for all that is ill or wicked while the gods who planted the jar of evil on her and to whom she owes her very existence wash their hands of culpability. Similarly, narcissistic abuse survivors are saddled with toxic shame “gifted” to us by the narcissist that we obediently if not gratefully bottle up and tuck away deep in the dark recesses of ourselves out of sight and mind where it continues to linger, poisoning us, long after the narcissist no longer does. We don’t acknowledge this growing reservoir of pain deep within our being much like the narcissist fails to acknowledge us and for much the same reason: to do so would undo the comfortable illusion, the lie we’ve invested in and grown accustomed to.

But the pain will not be denied. It takes the taste out of life. Bleaches the colors. Numbs the ecstasy of awe. The sheer weight of it drags on us, leaving us spent before we even begin. No, for there to be any hope of recovery then the pain cannot be ignored. It must be freed in order to be free of it. Pandora’s jar must be emptied.