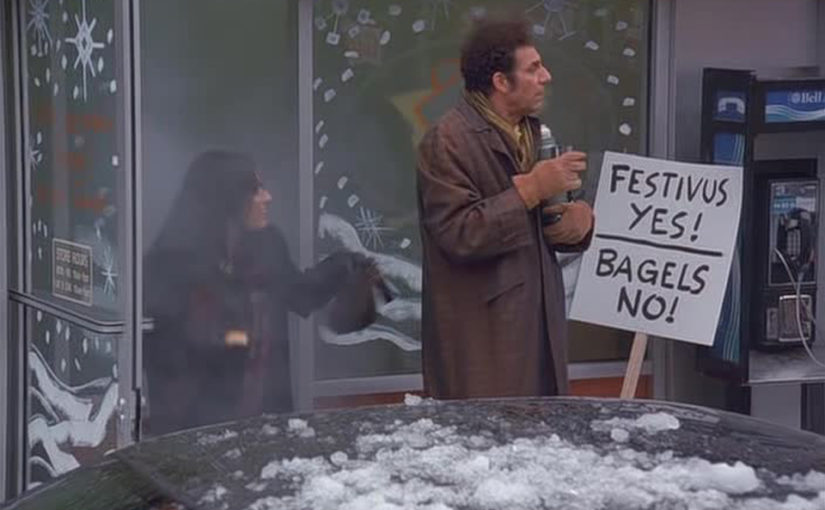 The Christmas season – now barely held at bay by the monsters of Halloween lest it begin after the smoke of Independence Day clears – is a stressful time of year for many people. I’m not one of those people. But even I feel a palpable sense of relief on Christmas Day as though the Yule Log were a metaphor for a difficult bowel movement.

Between Thanksgiving and Christmas, there are mass migrations during some of the worst weather conditions of the year in order to reconnect with families, exchange gifts and open old wounds. Mix the blood sport of Black Friday and the impending deadline, guilt-driven, mass media drumming, last minute Christmas Eve shopping into this generalized manic-depressive social malaise and you’ve got a season of survival more so than that of celebration. Pa-rum pum pum pum! 🎶

But not for me.

Connecting with family ended decades ago as, one by one, they rejected and thus relieved me of the obligation. It started around the time Mother called to inform me that she would be unavailable, celebrating Christmas with her new family 2.0 inlaws in New York. Years later, she’d ask me to pet sit over Christmas holiday so she wouldn’t have to spend money on a kennel while she was away. As our relationship deteriorated so too did my relationships with my siblings until they also swore me off along with some extended family. The rest, I’ve never been close to. So it’s just me and my dad anymore.

Which is fine. Simple. No illusions to pay lip service to. I don’t have to dread being yelled at for doing or not doing something. I don’t have to fight with anyone. I don’t have to anything. It’s like a weight was lifted off my shoulders and I’m free to pay attention to people who actually care back.

I briefly considered sending Mother a greeting card, wishing her a Merry Christmas and expressing my sincere regret for how things soured between us on the lost little [false] hope that it could open a constructive dialog between us and mend family bonds by extension; however, I thought better of it upon reviewing the warnings from others wrestling with similar twinges of guilt-ridden conflict and the abuse they invited to be revisited upon them by their own sick families. It’s not worth it, they warn! Just don’t do it!

It’s worth keeping in perspective that these are sick people and we do care about and want to help them but their disease is such that they don’t know they’re unwell and can’t help but hurt us so we have to find ways to grieve and accept that and keep a safe distance away from them. This “all about family” holiday reminds us of this loss and it hurts, but we endure it because it hurts less than they do. If they could love us then they would do differently.

When supply is low and demand is high, so are the prices. My television burned out (because that’s how everything is made anymore) last summer and I’d priced some replacements a couple months ago but didn’t make a decision. Fast forward to now and those same televisions are at least twice the price with a markdown?! Total scam!

So post-Christmas Apocalypse and pre-New Years is certainly the window of time to pick over returns and any remaining stock that businesses slash to move off their books before the next fiscal year drops — you know, if you’re going to indulge this insatiable, empty consumption culture at all. More stuff might not bring us happiness but a better deal on it might just leave us less sad.

The gift of a stress-free Christmas is probably the most loving gift one can give themselves. Days are getting longer again and fun Christmas decorations light up the still very long nights. Clients off on holiday are less demanding.

Should some self-righteous scrooge masquerading as a Christmas martyr call you selfish for your utter lack of fucks, smile and warmly thank them. They’ll be dead soon taking all this bullshit far too seriously and truly give us reason to celebrate. Stress contributes to the annual spike in deaths, especially among the elderly and infirm, this season — so relax. 🙂