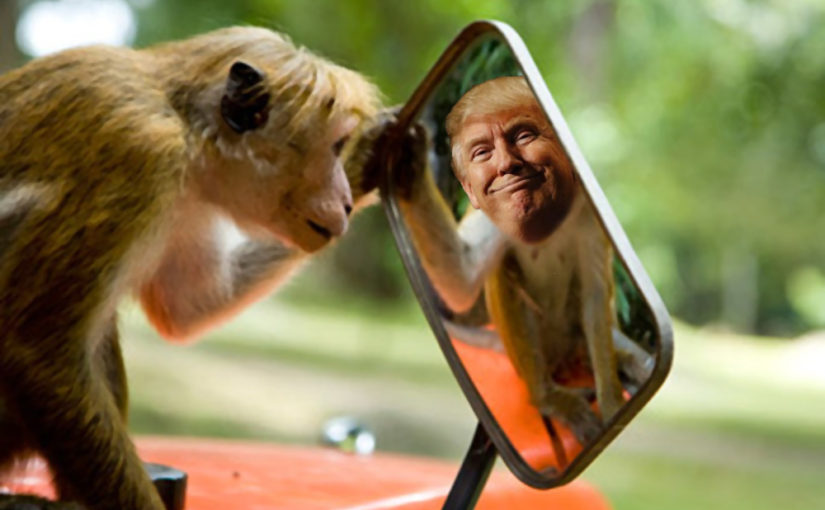 Few things appear more perplexing than a someone aware of and seeking recovery from narcissistic abuse in full-throated support of “unpresidented” Donald J. Trump, a man that a significant number of psychologists have been compelled beyond usual ethical constraints to point out the pattern of malignant narcissistic behavior of (behavior that could also be explained by drug use, dementia or syphilis). After all, wounded healers that we are have sought answers that we’ve sacrificed for to move beyond the suffering we happened to find ourselves in and many of us share what we’ve learned so that others might do the same. That any of us could or would become enamored with a prime textbook example of the very thing we struggle to liberate ourselves from seems beyond the pale. And yet it happens.

I think it happens for the same reasons many of us get burnt and think we’ve learned our lesson only to find ourselves in the same sort of abusive relationships – casual, romantic, professional, etc. – over and over again; a seemingly perpetual cycle of abuse that causes trauma bonding (or, in this case, Trump bonding); a deeper and deeper rut that becomes easier and easier to fall back into and conversely ever more difficult to climb out of. While a huge step towards recovery, it’s not enough just to know that this is happening or how. The information must be acted on in order for us to change and that often can be more risky, painful and exhausting in the relative short term than simply surrendering to the role we’re literally training ourselves for, as victim or abuser or both.

It’s like that friend we have (or maybe it’s us!) who’s otherwise intelligent but dating a total loser and we think should know better. But what we fail to realize is that the jerk we see our friend with isn’t the same person that initially made our friend feel special, it’s the just loser they turned out to be. Our friend will do anything, deny and rationalize away any behavior, to maintain the image of the person who makes them feel special about themselves. Not because they don’t necessarily know better, but because they don’t feel better by themselves. So where our friend sees a prince 🤴 through the same distorted lens they see themselves through, we still just see a frog 🐸 because nothing about us is reflected back in the loser their dating.

So it is with Trump who is nothing if not an accomplished confidence man. As mind-boggling as it might be for many of us, his true believers don’t see a crass, demented, conspiracy-addled, pathological liar trolling celebrities on the internet and constantly whining like a little bitch about how unfairly he’s treated; they see an empty suit that they’ve filled with their own hopes, dreams, values and everything great about themselves that makes them feel special.

Like the myth of Narcissus, they have fallen in love with a reflection of themselves, a trick of light in a pool of water they end up drowning in desperately trying to consummate a relationship with someone that does not actually exist outside of themselves.

Hating Your Cake and Eating It Too

It bears repeating that not all victims of narcissistic abuse become narcissists but that all narcissists are victims. I remember in school there were two kinds of kids who were bullied: those, like me, who simply wanted the torment to end and those who wanted to be accepted by their tormentors and became bullies themselves. I think those of us who educate ourselves about and work through recovery from narcissistic abuse whilst simultaneously throwing our support behind an unabashed bully who perpetuates said abuse are the latter kind.

Being for the abuser but against the abuse is an inconsistency, a schism, a civil war within ourselves that causes us a great deal of distress that we misinterpret as an attack upon us from without that we respond to defensively, attacking whatever happens to trigger this inner tension as though it were the cause —  narcissism being just such a defense mechanism. Donald Trump, himself, offers up no shortage of scapegoats for his true believers to heap blame upon in order to rationalize if only temporarily relieve the pressure of this moral dilemma turned persecution complex.

Unchecked, short-term reward wins out over impulse control, delayed gratification or any sort of cohesive arrangement of core principles. All that matters is obtaining more reward, like junkies supplying ourselves with whatever means available necessary to soothe and avoid dealing with our own conflicted feelings until self-denial defines us and we become the mask. And when there are no scapegoats left to sacrifice, those of us who don’t take responsibility for ourselves – narcissists that we have repeatedly chosen and trained ourselves to be – are left with no other option than to turn on each other.

Victims of narcissistic abuse who choose Donald Trump and continue to defend his behavior over their own instincts consequently become extensions of him. Sad! 👌