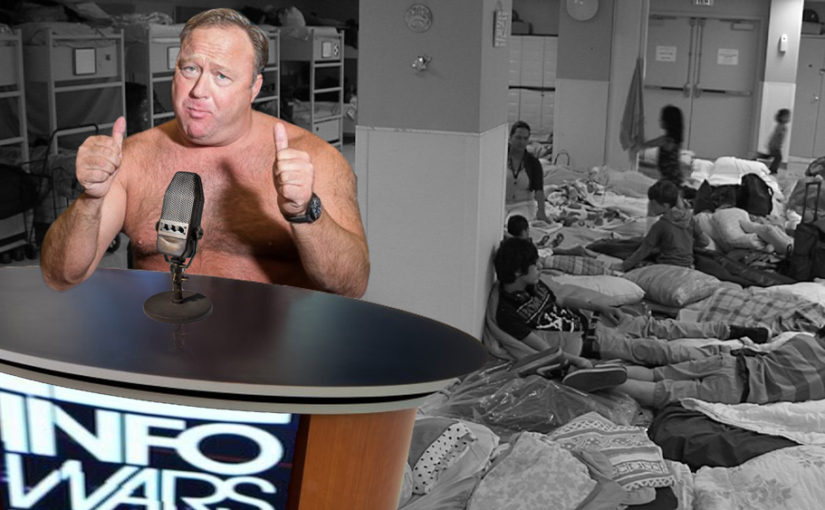 Austin, TX — head of the multinational news conglomerate, InfoWars, and mainstream media magnate, Alex Jones, has pledged to literally give the shirt off his back to homeless transgender teens.

Born Alexandra Rose in 1974, Jones knows how challenging growing up transgendered can be.

“Grandparents were always buying me dresses, telling me what a pretty girl I was. But inside I knew I was a boy,” recalls Jones, squinting as he pauses thoughtfully. “If I come off as cocksure, as too over-the-top, it’s only because I decided long ago that I would leave no doubt that I am the manliest man who ever manned.”

Are the millions of people who listen to Alex Jones the understanding sort?

“Yes. I think so, yes.” Jones replies, leaning back. “You know, a lot of the guys who call into my show can’t say enough about this or that being shoved down their throats or up their butts. We joke about water turning frogs gay and things like that a lot to take the edge off but the fact is you are who you are and there’s no shame in it.”

Jones continues with the cadence of machine gun bursts, becoming more animated with each passing word.

“To everyone listening, I hear you brothers. And sisters. Or whichever you are most comfortable identifying as. Whatever feels right for you, that’s liberty. That’s the freedom we’re on the front lines fighting everyday for in this war against the globalists. The point is that you hear what I’m saying, you’re buying what I’m selling and this is my way of giving back. My way of saying thank you.”

Beads of sweat have formed rivers down his pink, flapping face and began soaking through his shirt. An odd chemical scent fills the studio.

“I go through at least two or three on a taping of the show,” Jones remarks, tearing off the sweat soaked shirt he’s referring to and wiping his glistening forehead with it before tossing it to an assistant wearing elbow length rubber gloves who deposits it into a sealed plastic pouch.

“I don’t need to wear them. I mean, just look at me.” Jones rubs his hands through the carpet of coarse, wild-boar-like hair covering his girthy torso. “So why not give them to the hairless and needy?”

All the super male vitality supplements Alex Jones takes regularly and sweats into his donated shirts can sustain an average young adult for two, maybe three weeks without food or water just by absorption through the skin while wearing them, he assures us.

“And anyone who ingests them directly might become damn near immortal!”