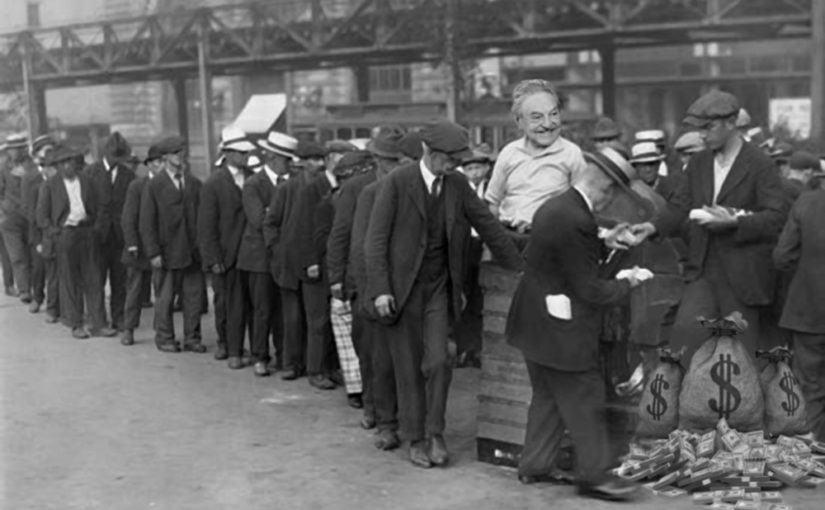 Katonah, NY — Outside the quaint Blue Dolphin Diner the first Monday of the month, throngs of jobless loafers wait patiently – many of them stoned on the drugs, some plucking guitars or slapping bongo drums – for their handouts from liberal mega-donor, George Soros.

“I think it’s great,” laughed Thomas Rathbun, a 23-year-old aspiring musician from Oregon from which wafted a pungent odor of marijuana and unwashed wool. “Like, I had a job. But then Donald Trump was elected and I was like, no way man! Not cool! So I had to protest. But then I got fired for doing that instead of showing up to work. And that sucked. But then I heard this old rich dude was paying people to protest and I was like, sweet! Why couldn’t this be my job, you know? I was so there. And now I’m here.”

“I mean, it was getting to where I couldn’t afford the new iPhone. No one should be asked to live like that!”

Not all the losers stretching around the block are habitual couch surfers like Thomas. Some, like Mary Berk-Fernandez, had lead respectable lives until poor life choices lead them to become welfare queens mooching off the taxes of hardworking Americans.

“I just couldn’t have enough unprotected, extra-marital sex,” Mary said, holding one of her twelve children. Another three huddle around her bowed legs, looking out at us suspiciously with hard, beady little eyes. “With most of their daddies in jail and the state cutting my benefits, I don’t get much child support. After Donald Trump had the last five with jobs deported, I knew I had to do something. I had to make my voice heard.”

Mary wipes the tears welling in her eyes. “I mean, it was getting to where I couldn’t afford the new iPhone. No one should be asked to live like that!”

Most of the residents of this quiet hamlet that we spoke with were supportive of their super wealthy, philanthropist neighbor’s efforts to fund a clandestine army of ne’erdowells to resist what many described in various ways as a fascist right-wing conspiracy of lead-poisoned lunatics.

“Sinister, shadow governments have always been one of George’s favorite hobbies,” long time local resident, Gertrude Beaudette, tells us. “Ever since he escaped the Nazis, you know.”

But not everyone was so laissez-faire.

“I had to see this shit for myself,” shouts a man in a dirty pickup truck with several pealing Confederate flag bumper stickers, wearing a thread-bare red “Make America Great Again” hat and yellowed white tank top stops in the middle of this otherwise upscale neighborhood.

“They all need to get off their good-for-nothing butts and get a damn job!” the man hisses at us through the festering gaps between the remaining tooth-like protrusions in his face. “They’re just mad because Trump won and now they have to work for a change, bunch of crybabies!”

A shrill “Yeah!” comes from a similarly dressed but vastly more obese woman passenger in the cab.

When asked what gainful employment they didn’t have to be at on a Monday afternoon, the couple called us “jew media faggot libtard cucks” and pealed away down the street howling “Trump won! White power!” and cranking an 8 track cassette tape of Ted Nugent.

“They’re just mad because Trump won and now they have to work for a change, bunch of crybabies!”

As the afternoon winds down, the crowd of freeloaders disperses back to the basements and sofa-pull-out-beds from whence they came, checks in hand. A glint of determination in their glazed eyes.

We catch a glimpse of Mr. Soros as he departs the diner for a black, window-tinted limousine but are stopped from approaching him by conspicuously well-armed body guards.

“Mr. Soros regrets that he is unable to meet with the press at this time,” we’re told by a spokesperson. “He’s had a long day undermining Western democracy in his blood-bound service to the one most desolate and is now looking to relax with colleagues, Hillary Clinton, John Podesta and their families at a pizzeria that serves children.”

Editor’s note: Seriously, I’d never heard of George Soros until Trump-emboldened conspiracy cranks started venturing out from the lunatic fridge here recently, muttering about this guy as though he were the antichrist made flesh and single-handedly supporting financially everything they hate — and they hate a whole helluva lot. 🙄