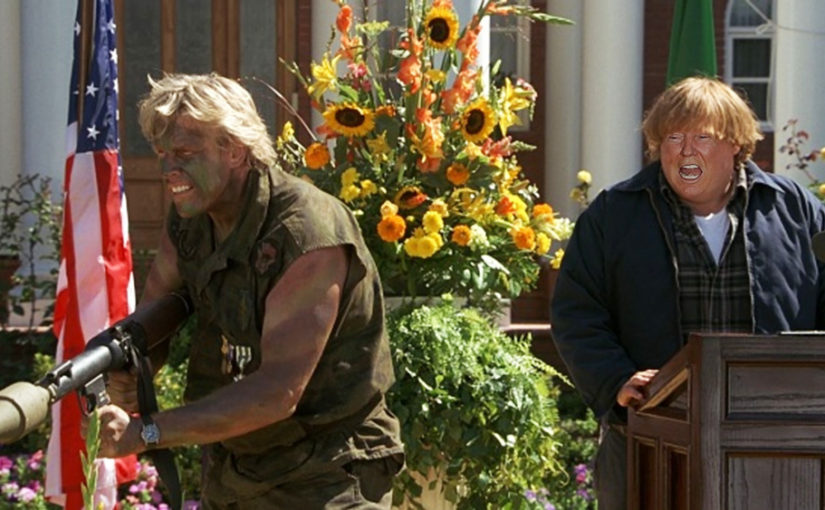 Washington DC — President Donald Trump has hired actor, Gary Busey, to head his investigation into reports of widespread voter fraud that the newly sworn-in president believes robbed him of the the popular vote.

“Gary’s a close, personal friend of mine,” the president said, in a press conference Sunday. “When he was fired from his last job by this guy – you should see this guy, this disgusting slob with bad hair, cheap suit, total loser – when he was fired, I thought, you know, this is terrible. Just terrible. I have to help this guy. Gary’s a great guy. Fantastic guy. That’s what I do. Right? I help people.”

“The way Gary handled voter fraud by corrupt Governor Tracy, that nasty woman – so nasty, just the worst – here in Washington, it was beautiful. Just beautiful.” The president continued. “Exposed! She was exposed, using Gary’s father who was dead to vote for her. Millions of dead people. Probably a lot of illegals too. Shameful! Total fraud! Gary did that. Amazing!”

Reached for comment, Gary Busey issued the following statement: “Absolutely, I’m daffy to Donald’s duck. I was totally ducked. He gave me a pond, sprinkled some breadcrumbs. You know, ’cause a duck’s got to eat. Soggy bread. Don’t shit where you eat. Ducks do that. It’s not sanitary. Gator’s don’t like it. Bad for their skin. Too many gators if you drain the swamp. Drain the lizard. That’s what I’d do. Our friendly reptiles like dry, arid climate like that. What was the question again?”

When asked why there was no evidence to support the claim that three to five million fraudulent votes were cast for the losing candidate, Hillary Clinton, Trump responded, “They’re very smart, these people. Bad people. Very smart.”

President Trump went on to state that his “heart goes out to” the families of the victims of the “recent terrorist incident at Nakatomi Tower” and renewed his pledge to fight “terrorists who talk like they’re from other countries.”

Sources close to the president stated off the record that they had tried without success to wrench the television remote from his control on multiple occasions but that his “hands were uncannily strong for being so small” like “pinchy, little vice grips.”