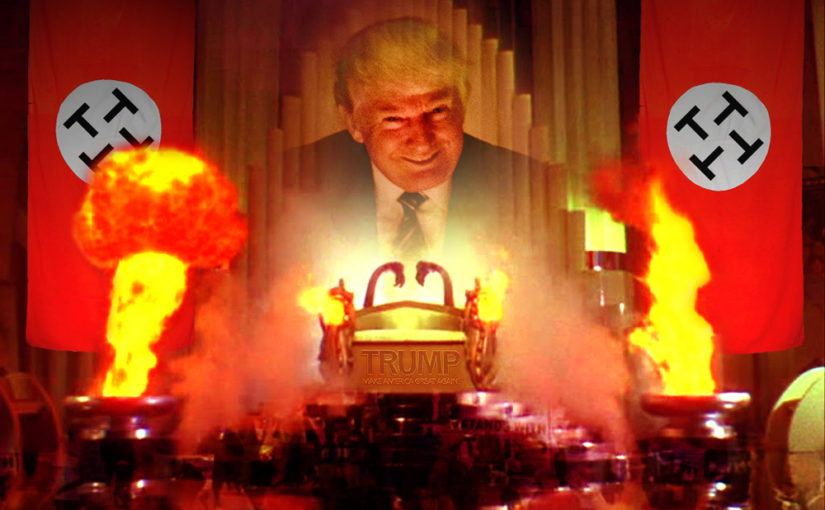 When 2016 Democratic presidential candidate Martin O’Malley called Donald Trump a carnival barker, he couldn’t have been more right. And this empty suit’s inane, incessant barking – or tweeting, rather – and the rest of the Trump sideshow featuring Americans’ worst impulses is broadcast at me as breaking news, sponsored by pharmaceuticals one might be tempted to, indeed, ask our doctors about in order to cope with this bullshit — at least while we can afford to before congressional Republicans take away taxpayers access to healthcare … again. Yes, pay no attention to those boring legislators quietly pulling levers and pushing buttons behind the curtain over there in dull old Washington. No, here’s the latest incendiary statement from Donald Trump and reactions to it from very important people whose opinions you must care about. Can you believe it!? How exciting! Have some more! There’s always more.

A man distracted by shiny baubles is, himself, a shiny bauble distracting us. We rubberneck to take in every grisly detail of this gloriously terrifying wreck, thumbing it up or down on social media like bloodthirsty spectators (or participants) in a Roman Colosseum. Hmm, whatever happened to the Roman Empire? Oh, that’s right. It fell victim to health and environmental problems, crumbling infrastructure, military costs, unemployment and political corruption while the sick, jobless people were being entertained by dramatic events at The Colosseum hosted by an increasingly psychotic, decadent ruling class. Any of this smacking vaguely familiar yet?

It’s not enough to call Donald out on his crass, disgusting, socially abhorrent behavior — he suffers no consequences for it (insofar as he’s able to perceive) and is, in fact, is rewarded for it with attention lavished upon him. Whether it’s adulation or criticism, the spotlight remains fixed on him. Trump feels special, important, powerful. The media, the public and Donald by their very natures enable one other in a kind of functional dysfunctional, symbiotic relationship, like junkies addicted to the others’ drug.

Struggling to rationalize Donald’s erratic, developmentally arrested behavior or treat him as though he were, can be or will ever become a normal, healthy person is a mistake; a denial of the thin-skinned, immature, tempestuous, petulant lack of impulse control that is Donald Trump. Accept the terrifying, unavoidable, repeatedly observed truth that Donald Trump is the seventy-year-old, undisciplined toddler endowed with an epic sense of entitlement (if very small … hands) evident in his every word and deed, that our every sense and instinct tells us he really is this thing.

When someone shows you who they are, believe them.
— Maya Angelou

And how can such an unfit individual survive much less succeed in society? Because we placate Trump the way we placate any child who overwhelms us and mistake this successful bullying for strength because it feels better to believe that someone must be tough but fair to have earned the vision of success we’re presented with over the horrifying notion that they’re a psycho tearing through peoples’ lives, leaving a trail of destruction and mountains of debt in their wake in order to present a mere thin veneer of success we’re faced with, opulent as it is fake.

Media outlets and international leadership would do well to retain child psychologists on call for the next few years to put Donald Trump in proper context and advise a more constructive course of action.

First item on that agenda should be: stop hanging on Donald’s every word. Donald Trump is not a man of his word. Words are meaningless to him but for their utility as a means to convince others to whatever end he wants at any given moment. His unfiltered brain farts feel true when they leave his mouth hole and not one minute after. Clearly. He doesn’t even remember what he said because that was then and there’s no point now. History is flexible. Reality is fluid. Anyone who dares disagree is the mean, nasty liar, not him. This is reflex. An integral part of what he is. Short of intense deprogramming, there no hope of correcting him.

Nor should he be. I just don’t want to hear the words of a disordered person normalized as though they’re supposed to mean something. They don’t. There’s nothing implied to be parsed from them, nothing to follow up on. There is no underlying plan, no strategy, no forethought whatsoever. It’s just a stream of spontaneous, disjointed thoughts leaving his head like crazies fleeing an asylum. Donald Trump is demonstrably incapable of subtext. He doesn’t understand it. He cannot speak or write it. Stop listening to him and just pay attention to what he does, that he doesn’t put anything in his mouth that he shouldn’t or break anything valuable. I hope the White House is sufficiently child-proofed because I fear the nation at large may not be.

If Trump’s statements have a proper place anywhere, I suggest they be listed before the corrections and retractions at the end of a news broadcast or back page of a news publication. This would immediately free up time and space for featured stories on events that actually effect our lives and what, if anything, we can do about it — you know, news! What Trump does is news, for the time being. What he says isn’t. No, it’s the same petty trolling he’s been doing for decades now even before the internet, Twitter and smart phones. The man is pathological. Let tabloids, satirists and conspiracy loons run with this shit. Don’t mainstream it. Please, let’s not elevate his obsessive compulsion to shame celebrities into liking him somehow to anything close to being healthy, socially acceptable conduct.

Republicans and Democrats are like divorced parents sharing custody of an awful, bratty kid (Donald Trump) that they’re both responsible for and both hate but that one parent (the Republicans) is working to turn against the other parent (the Democrats), to cause a scene that distracts from them undermining the people of our rights and products of government that we’ve earned — not just in Washington but in state governments across America. But Donald’s unstable, his fragile ego is easily bruised and should he ever realize that the Vice President, Mike Pence, and others close to him have made him their little bitch, Republicans would have one crazy hot mess on their hands.

That would be news!