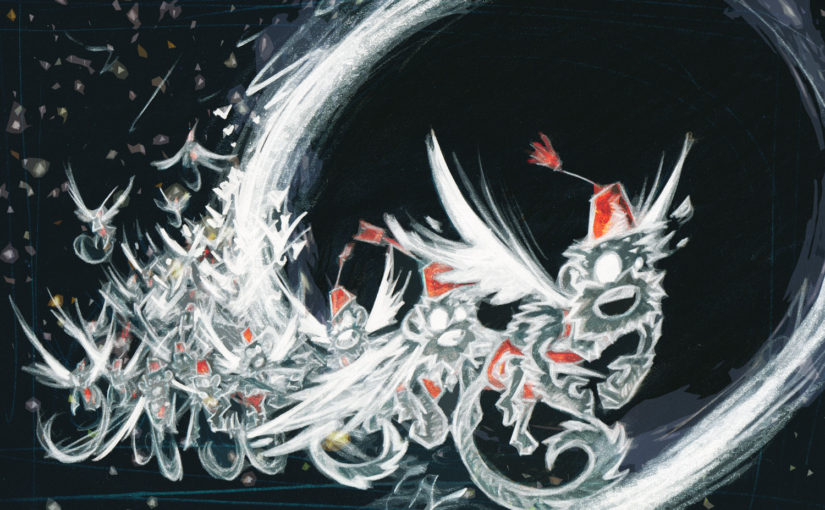 Chameleon imposters, the narcissist’s disguise is a projected identity, a false self  plagiarized (interests, beliefs, appearance, behavior, etc.) from those close to the them. These enamored victims mistake their ideal selves reflected back at them (love bombing) for a close friend or soul mate in the narcissist, someone with whom they identify and share values with. Drawn in by their own desire to feel special and seduced by the illusory promise, the false hope to have this desire fulfilled in the narcissist, victims develop a vested emotional interest in this belief, this delusion, vigorously defending it and therefore the narcissist against any evidence to the contrary. Thus, a symbiotic, codependent relationship is formed between narcissist and victim, infectious parasite and contaminated host.

Normal, healthy people grow to perceive the world around them, to process thoughts and emotions internally. The narcissist, developmentally stunted and lacking any functional internal core sense of self (awareness, worth, purpose, etc.), cannot do this for themselves and so, like their projected false self, this functionality is externalized via and effectively outsourced to their victim who, having been successfully co-opted, becomes an enabler (aka. flying monkey, proxy, interlocutor) obediently providing feedback about the world. And about the narcissist.

Additional enablers form a network, a kind of collective like a botnet, The Borg or super organism like that of an insect colony all functioning together in a system as a single entity. The narcissist, acting as a kind of old fashioned telephone operator, becomes the central hub through which all information is passed amongst enablers. Connecting some. Disconnecting others. Keeping their functions separate, jealously monitored and always under control.

In assimilating these external objects (people) to perform their internal functions, the narcissist mistakenly perceives them to be internal objects that they are rightfully in possession of. This is how they take undue credit for the accomplishments of another whilst assigning to others accountability for the consequences of their own actions. The narcissist fails to make any distinction — and therefore recognizes no boundaries — between themselves and others. They are at once everyone and no one.

If we happen to be one these objects, an enabler, then our abandoning the narcissist is tantamount to cutting off a limb and stealing it from them (narcissistic injury). And doing so is treated as such. We may be stalked, harassed or even assaulted for our audacity to disobey, compelling us to surrender and submit to our given function, the purpose that the narcissist designated us for.

These reactions, like nearly everything else, are carried out by the narcissist’s enablers. These are frequently people we know and love (friends, family, peers, etc.) and who we believe know and love us. But they don’t. Not really. Not for who we are as individuals but rather our utility to the narcissist and therefore themselves by extension. The moment the narcissist perceives us as a foreign object, as other having betrayed them then we are not one of them — our respective orbits around and in service to the narcissist being the only thing we actually ever had in common — and they, mere extensions of the narcissist, turn on us.

In this circumstance, these enablers, these shadows of empty shells of people we thought we knew, this swarm of flying monkeys are victims in search of an abuser. It can’t be the narcissist lest they suffer what they’re doing to us on behalf of the narcissist. So we must be it.

Their words are the narcissists words. Vacuous, hollow echoes of their malevolent benefactor that these mouthpieces mindlessly parrot at us like broken records. Any defense is perceived as an attack. And every misconstrued “attack” on them is then used to justify their “self-defense” against us. Again, these people are essentially zombies so warped by the narcissist, so completely poisoned against us that they behave as though we’re hurting them by not allowing them to hurt us. We should be so ashamed that we refuse to be shamed! This is gaslighting. It’s shaming, blaming and guilt-tripping. It’s a veritable parade of manipulation tactics, one after the other, until one finds it’s mark and they double down on it.

The objective is simple. We either cede to the punishing demands delivered via the flying monkeys, return to our place in the hive mind and our role serving the narcissist, the sucking person-shaped black hole therein or be destroyed as discarded property of the narcissist. We can either be forgiven, albeit on a tighter leash, or condemned.

For those of us who choose the hell of condemnation over the hell of forgiveness, the blow back is as swift as it is severe. The smear campaign enacted against us can cost us loved ones, livelihoods, even our lives. We can’t fight the swarm. There’s too many. It’s too much. We become exhausted. And fighting only serves to feed the narcissist who thrives on the drama surrounding them as much as they glow in the accolades of their sycophants. There’s no way we’re coming out of this not looking enraged, vile or completely bonkers — ironically, still reflecting the narcissist’s projected despicable true self that they feel deep, unabiding shame for — to people we understandably though mistakenly believed were capable and willing to know better. People who respect us, give us benefit of the doubt. Those who don’t, can’t be reasoned with. When they stop listening, it’s time to stop talking and take our leave of them.

In isolating us, the narcissist reveals their worst fear: abandonment. Inflicting upon us the very event that created, or rather broke, them to begin with. And abandoned they must be again to save ourselves. Them and the swarm that is them. And before they discard us and install some enabler or another to replace us like a burned out fuse, they’ll tell themselves, the gossip will spread throughout the swarm what horrible, selfish people we always were and that’s just the way it is.

Cut the losses. These are no longer the people we once knew or thought we knew. Rather, they are the consumed remains of them. Zombies. Gather support. Whatever they’re calling us “selfish” for (oh, and they will) is probably something we’re right to do for ourselves. Swat each flying monkey as it rears it’s ugly head. Block them online. Don’t take their bait. Avoid their traps. Give them nothing. Limit contact with them as much as possible.

8 thoughts on “Swarm of Flying Monkeys: The Narcissist Hive Mind”